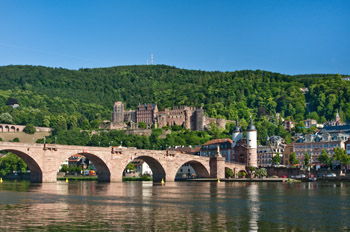 This could be interesting to most of my customers and friends, especially on the American side: tell me where you are from and I’ll tell who you are. This slight change of another saying is quite true.

I decided to publish in English, because we have so many Americans around us and because we might even have the same root:

as I said, I was born and raised in Sandhausen and now live in Nussloch. These two mentioned towns are about 10 km south of the beautiful city of Heidelberg.

If you haven’t even already visited our old city, you might have at least heard of the many “Heidelbergs” over in the US. It is one of the top destinations besides Munich and Berlin in Germany, that has based different American military bases for such a long time. Of course history tells: during the Second World War, a General said that Heidelberg should be spared to put up the European headquarters here. I guess we were lucky. Now I could pay you back for giving us the democracy we needed so urgently ;-)

Heidelbergs’ castle, the old town and river Neckar (you can see one of many bridges on the picture top-left) were saved and soon inhabited by so many Americans and visited by loads of tourists from all around the world.

So? Do you know the city through relatives or friends who were stationed here or just visited?

Learn more about this wonderful part of Germany and feel free to check out Google Maps below or see more pictures on the internet.

Warning: count(): Parameter must be an array or an object that implements Countable in /homepages/16/d477030229/htdocs/storie-di-karola.com/wp-includes/class-wp-comment-query.php on line 405

This publication is Copyright 2013-2016 by Waltraud Karola Brecht. All products, publications, software and services mentioned and recommended in this publication are protected by trademarks. In such instance, all trademarks & copyright belong to the respective owners.

Do you also want to have an amazing-looking website?


Warning: count(): Parameter must be an array or an object that implements Countable in /homepages/16/d477030229/htdocs/storie-di-karola.com/wp-includes/class-wp-comment-query.php on line 405